For more than 45 years, Wolfgang Kalb has been playing and singing acoustic Blues, predominantly Country Blues, as well as ragtime music, gospel songs and jazz ballads. He 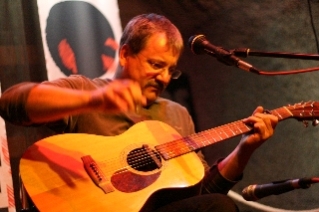 interprets the songs of the old blues masters in his unique way using the fingerpicking style or the bottleneck method on his resonator guitar, changing the music and lyrics and adapting them to his own personal situation. His repertoire includes the styles of his role models Blind Blake, Robert Johnson, Mississippi John Hurt and other country blues artists from the 20’s and 30’s. The musical influences of Muddy Waters and John Lee Hooker are also clearly evident. At appearances between the 70’s and the mid-90’s he shared the stage with regional artists such as Martin Philippi from Nuremberg and Blues greats such as Champion Jack Dupree, Louisiana Red and Blind John Davis. After taking a break from giving concerts that lasted several years, he started to tour again six years ago and has become firmly established in the German country blues scene.

As well as appearing at established blues festivals, he plays regular gigs at well-known jazz and blues clubs in , and 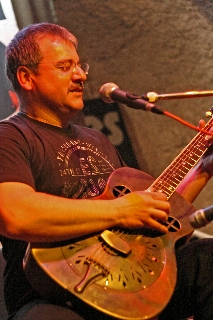 He is a welcome guest at previews of art exhibitions and as an opening act for bands. At church concerts he presents his spe­cial gospel blues show.

Wolfgang Kalb visited in May 2006, where he met blues veter­ans David Honeyboy Edwards and Robert Lockwood Jr., who has passed away in June 2006.

At his concerts, the musical journey through the history of this music is accompanied by stories about the blues, the origin of the songs and his personal experiences.

All of the songs were recorded live in the unique-musique studios in , without overdubbing, re-recording, double-tracking, sampling or the like of it.

On the CD “Got Them Old Walkin’ Blues” Wolfgang showcases 15 of his favourite country blues songs from the prewar era.

His new CD "Blues Songster" was released in summer 2018 and contains exclusively arrangements and interpretations of old gospel songs, spirituals and blues from the 20s and 30s.